Windows 11: The wait is over 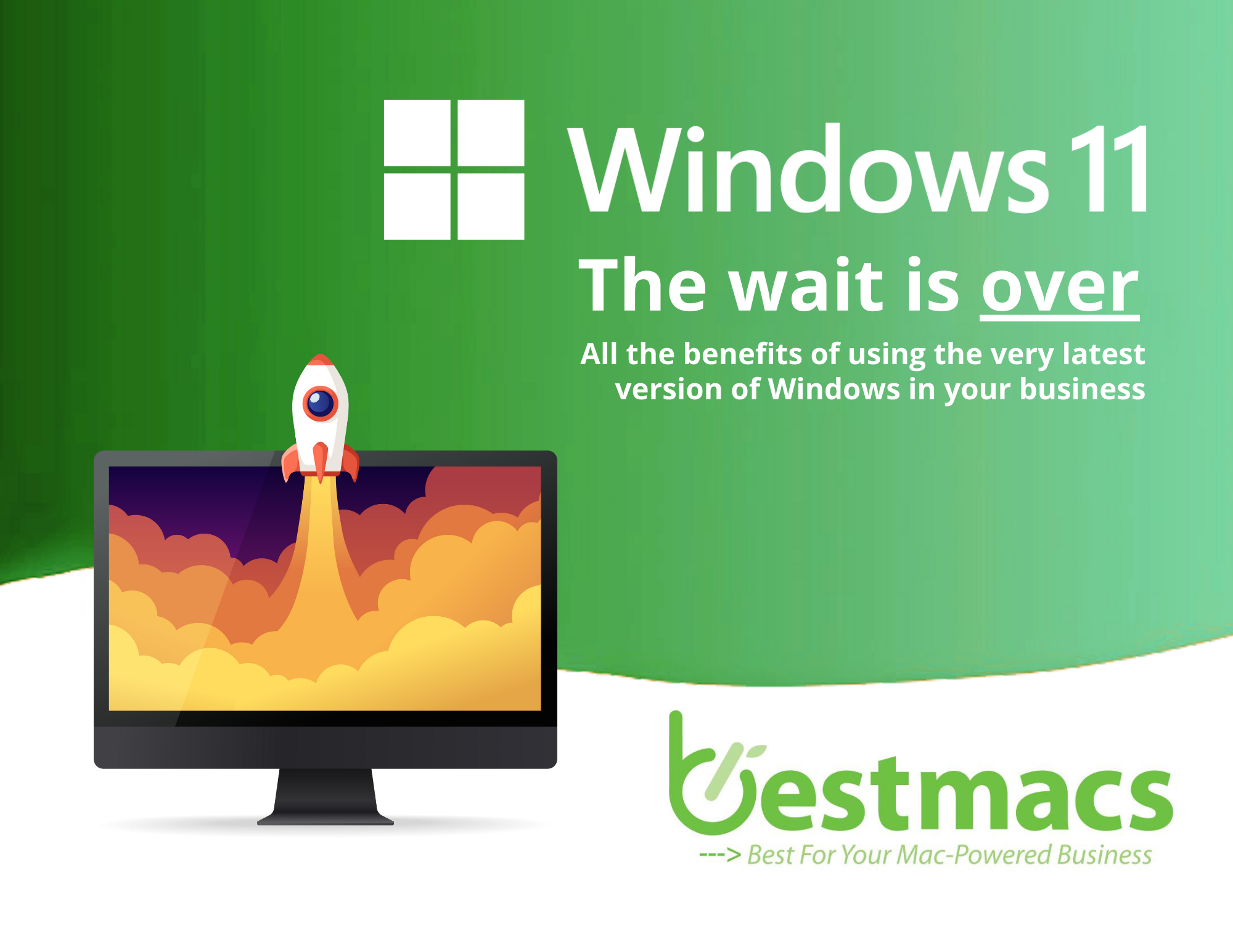 Back in June, Microsoft made a surprise announcement:
A new version of Windows was coming.

Most experts had assumed that Windows 10, which was released in 2015, had many more years of life left in it.

But now we know the future is Windows 11. We’re pretty excited about it – and believe you should be too.

Because Windows 11 has 3 major benefits:

As always with a Microsoft launch, you can’t just press a button and upgrade to Windows 11 today. In fact, it’s not yet available for existing PCs.

We’ve pulled together this guide to tell you more about Windows 11: Why you should use it and all the benefits. We’ve written this for ordinary people like you, not techy people like us.

Let’s start at the beginning, shall we?

If you want to get Windows 11 today, you’re going to need to buy new PCs. Windows 11 has a long roll out process, starting with new machines and working its way to older machines.

Some existing PCs will be entitled to a free upgrade, which is likely to happen in the first half of next year.

But even then, there are some strict hardware requirements. Microsoft is insisting Windows 11 will only run on machines that can handle it, and where it will be secure.

Yes that does mean some or all of your existing machines may never be able to run the new operating system.

These are the minimum requirements for running Windows 11:

Processor: 1GHz or faster, with at least two cores on a compatible 64 bit processor

The processor is the brain of any computer. It’s where all the actual computing is done. The GHz measurement refers to the number of calculations the processor can make in a second. The higher the number, the faster the computer.

RAM, or Random Access Memory, is the computer’s memory. It stores the information the computer needs while it’s working. The more RAM the better.

Perhaps a more recognizable term for storage is your “hard drive”, although these days most computers don’t have a disc that spins round. They use instantly-accessible storage chips, known as Solid State Drives, or SSD. This is where information (including your data) is stored when the computer is switched off.

UEFI is software that runs when you first start your computer. Secure Boot means it will only run software trusted by the PC’s manufacturer. This is a security measure to help protect your computer.

The TPM is a chip inside your computer. Its job is to protect your data from hackers.

This is the minimum for your display.

Plus of course your computer must be connected to the internet, and you will need a Microsoft account.

That’s a lot to check. Most people aren’t aware of what’s inside their computers at that level of detail.

Microsoft has an app that can check your business’s computers to see if they are compatible. The app has delivered some inaccurate results in the past… instead we recommend you get a trusted technology partner (like us) to check your computers for you.

Remember, the list above states the minimum requirements to run Windows 11. Ideally you’d be looking for a better processor, and higher levels of RAM and storage.

An important note on security

Microsoft is touting Windows 11 as its most secure release yet. Updates will be 40% smaller, and there will only be one big update a year, as opposed to the usual two. This is more in line with what Apple does with Macs and MacBooks.

Overall, fewer updates means less downtime for you and your team. Even when the updates are run at night, this is much more suitable for the way people do business today.

First let’s talk about the taskbar, which sits at the bottom of the screen in Windows 10.

In Windows 11, this is now called the Dock, and it’s optimized for touch as well as a mouse.

Some Microsoft has really improved the way Windows works for tablets, which has previously been a weak point. Touch targets have been made larger, and it’s easier to move windows around the screen. They’re also bringing Gestures, just like you’d use on a touchpad.

As well as your pinned items, widgets are now also accessible via the Dock. And the really cool part is that they have AI-powered dynamic features. These allow them to change or rotate, depending on the time of day or which apps you’re using at the time.

The Start Menu is now in the center of the screen, and this new cloud-powered button will also change dynamically, like your widgets, depending what you’re working on.

Widgets are available for third parties too. When you’re using Windows 11 you’ll have as many to choose from as on Apple’s iOS and iPad OS.

There are loads more features to help you multitask. Snap Layouts is a big one, which lets you arrange multiple windows across the whole screen in columns or sections, rather than just side-by-side.

And Snap Groups makes it simpler to change between apps without having to go back to the previous view again.

Another excellent intuitive feature is when you connect to an external monitor. Windows 11 will remember the positions your windows were in last time you used the monitor and go back to that view for you. This removes a lot of frustration!

Now to the Apps. The Microsoft Store has had a makeover of sorts. The content has been much better curated, and it’s easier to manage your purchases. There are even options to mirror them to your TV.

Apps like Disney+, Adobe Creative and Pinterest have already been added to the store, and loads more are set to follow. Android Apps are also available for download, accessed via the Amazon App Store. It’s possible we may one day see some Apple apps available, such as iMessage.

Teams is now integrated into the Dock, which makes it easier for you to join meetings and calls. However,  Skype is taking a back seat in Windows 11 and isn’t automatically available, though you can still download it. It’s been suggested that it may eventually disappear from Windows altogether.

Once you’re using Windows 11, the Health Check App can help you to refine your settings. It makes suggestions on things like brightness, power saving, and storage.

The design of Windows 11

The whole look of Windows 11 really stands out from anything Microsoft has done before.

The design – named Fluent Design – is modern and sleek, with rounded edges and a fresh simplicity.

You can theme some of your core apps, like Mail and Calendar, separately from your primary theme. And eve the basic tools, like the Snipping Tool, have been revamped and improved. 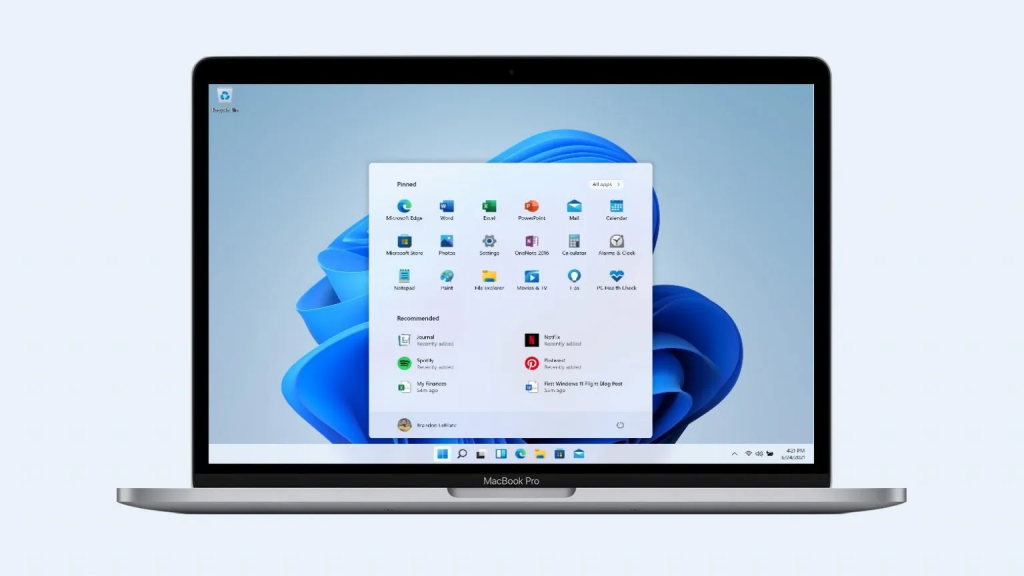 Ready to get started?

We can understand that. It’s always exciting to get the latest version of something, especially when it’s been improved as much as Windows 11 has.

If you’re waiting for the free upgrade to your existing computers, you’ve still got months to wait. Here’s your checklist before upgrading:

If you’re not sure how to do any of the above, it’s important you get expert help. If you rely on a backup or recovery tools,

and you haven’t completed the steps correctly you could find your business paralyzed with computers that don’t work, and data inaccessible.

And if you think you need to upgrade any of your computers and buy new devices, you should act now. You may already know there’s currently a global chip shortage. This means getting hold of new PCs and laptops is slower than usual.

As with any big change in your business, there’s  a lot to consider.

Would you like expert advice? Or someone to just deal with all of this for you?